I am just amazed at laid back he is, how much he still loves to be cuddled up against us when he is napping/ or just sitting wanting to play and sit on your lap to watch everyone and how much joy he brings to the entire family.

It’s so precious that each one of kids are developing such a unique and special bond with him, that they are going to carry with them for the rest of their lives.  Brielle loves to feed him, cuddle him, and make him laugh (around 100 times a day), Joseph loves to play with him on the ground and just talk to him and introduce him to new toys, and activities.  Luke loves to laugh (and in return malachi laughs back) and loves to sing “twinkle, twinkle little star” to him to calm him down, and Gracelynn LOVES to say “kai kai” and show him all of her toys and she has started to sing him to him as well and loves to see him laugh!

So even though his doctor appointment isn’t until next week, I am just going by what we have taken here at home!

-To be held! It’s so adorable how much he LOVES when we are holding him!
-To be talked to and play “peek-a-boo”
-To eat! He just tried baby food for the first time today and ate the ENTIRE bowl!! He loves food (just like his parents).
-To sleep! He has woken up past two nights 1 time for a feeding but before that we had a good stretch of sleeping ALL.NIGHT.LONG! Hallelujah! I just wish we could pass on the great sleeping to the girls in the house (including me).. but we are getting there!
-He loves to be hot! He loves to be pressed up against someone when he is napping!
-His carrier! He literally falls asleep in it almost instantaneously. We have now introduced the sling carrier as well and he has done amazingly well!

Dislikes:
– Clipping his nails! Though he is finally tolerating it a bit now!
– Changing his clothes.  He absolutely hates it now!

Teeth: None! 🙂 Though, the drooling has caused increase in spit up, so that’s fun! 🙂

Language:
I swear it’s like he is responding correctly to what we are saying at times! His cooing is incredibly adorable and his laugh literally melts my heart every time!

Milestones: Rolling over back to front on both sides now, trying to sit up on his own, and eating his first baby food!

Here are some pictures from the last few weeks and today’s monthly picture!

Thank you all for following along his journey and growth! I believe crawling and sitting up on his own is surely going to happen in the next few weeks! 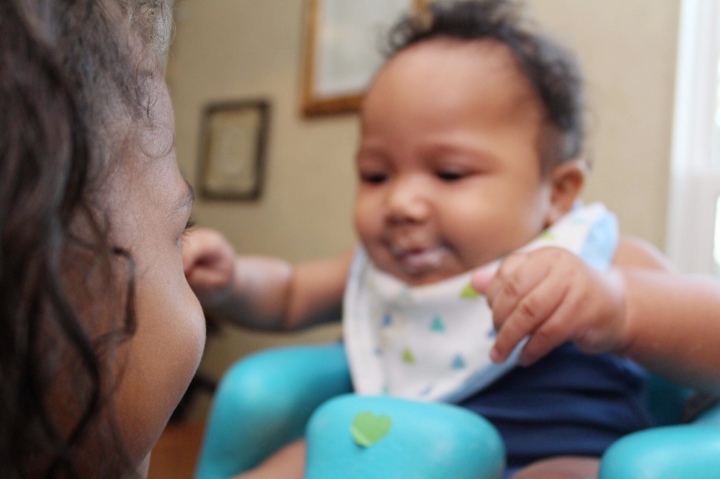 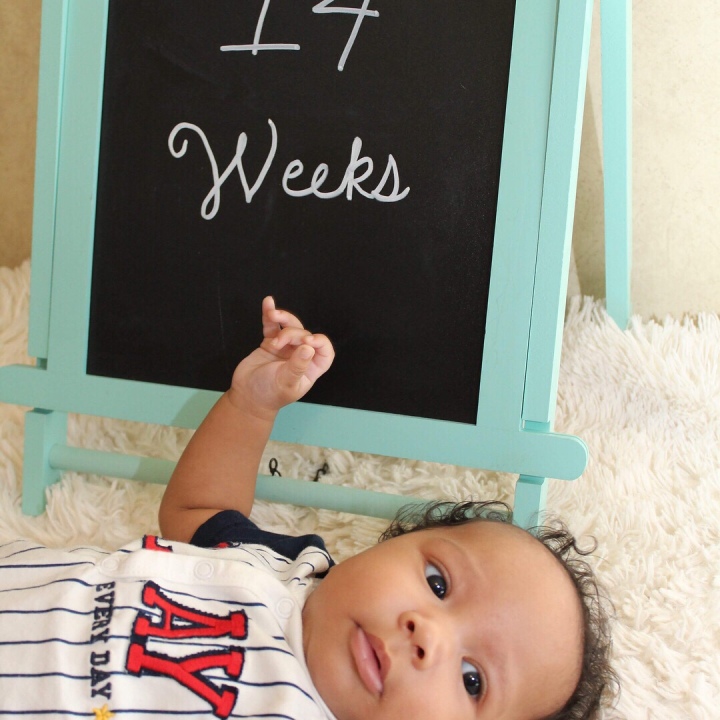 ©2018 Sheridan Johnson @Journey with the Johnsons. All Rights Reserved. 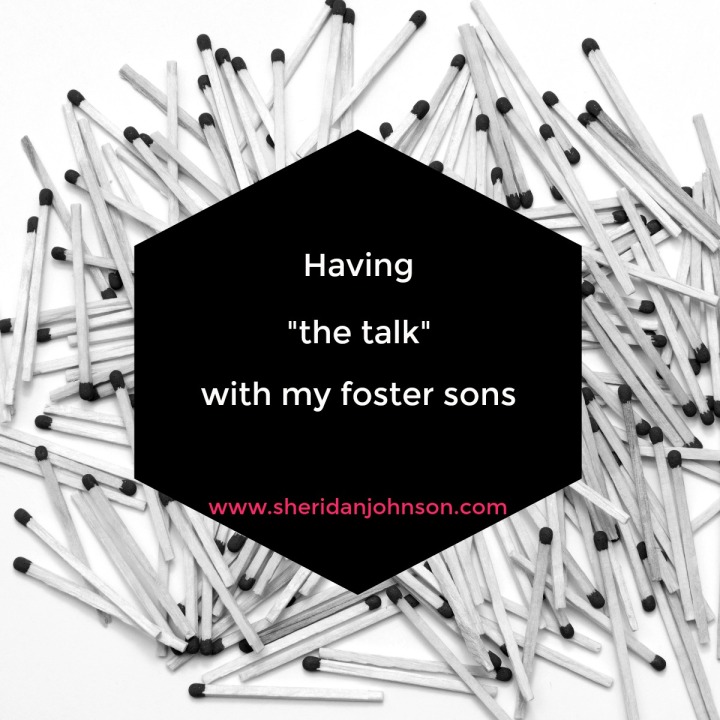 So on Monday,  I had to do the thing that I have been dreading since the day the boys came to us and they said “they might be up for adoption one day in your near future” to Shane and I.  Little did I know though, that the process to get here would take this long, and take such an emotional toll on everyone involved.

After termination of rights happen (which you can find a little more about what happened at our trial here), then CPS must tell the children what is about to happen, and that they will only have one more visit with their parents known as the “goodbye visit”.

The legal worker arrived on Monday afternoon to our house, and spoke to me outside for a minute stating that she would like me to start the conversation with the boys and she will feed off what I say, and then allow them to ask any questions that they are wondering/thinking.

I can’t go into a LOT of detail about word for word on how the conversation went, but let let me tell you..telling them that they will no longer have any contact with their parents after this last visit, and knowing how much that must truly hurt to hear, pulled at my mama heart strings so much.

I know the conversation needed to happen, especially for my 8 year old foster son because he was the one was so bonded to them, and wanted his parents to “stop doing bad stuff”, so he could go back home to them. He broke down sobbing when he realized what was happening, and I just held him so tight in his room while he weeped into my chest.  It truly broke my heart.  My 6 year old foster son, definitely handled the news way better than I thought he would, but he could be masking his emotions as well.  His phrase after myself and the legal worker were done talking was “that’s great, now we can get adopted!” and my 3 year just told me “I don’t know what you’re talking about” and then started laughing.  I even broke it down into toddler terms, and I am not quite sure he even understood it then.

I hope and pray that God continues to give them strength, just like it says in Isaiah 40:31 “but those who hope in the Lord will renew their strength.  They will soar on wings like eagles; they will run and not grow weary, they will walk and not be faint”.

Please keep the Johnsons in your thoughts and prayers as we are transitioning into new and abundant stages in our life and our journey! ♥♥ 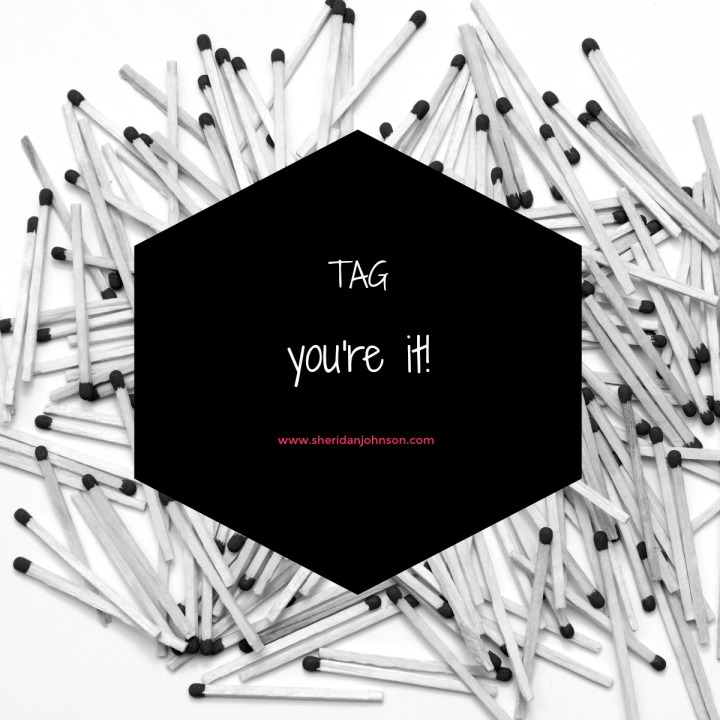 So as a parent of 5 (I am still amazed when I see that number), I see myself needing to plan a lot further in advance, but sometimes it just feels like the day-to-day activities are going so fast that you are literally tag-teaming with your partner (mine is Shane) to getting stuff done.

I literally try to not rush in life, and I usually get everywhere we need to be early (just in case an emergency occurs), but having two kids with baseball practice at the same exact times on the same exact days (twice a week), church twice a week, and my job every other weekend, I find myself playing tag with Shane now more than ever.

But even though it feels like life is so busy and is so overwhelming right now, and the only time we have to catch up on life is after all kids to bed at 8:30pm, we still try to make  that time for each other and not lose site of each other in the midst of all of this chaos .

We might be playing tag for quite a few years(or until they are all 18, lol!) but we know that  if we put God first in our life and our marriage, that things will always work out!

Do any of y’all ever feel like you are playing “tag” with your significant other to get a LOT of tasks done? Especially those of you who have multiple kids?

I think every foster parent (or most parents really) get to the point of just feeling very overwhelmed.

We often do everything for our children (cooking, cleaning, laundry,school, counseling, sports, church, and any extra activities).  We take them to everything, because we wouldn’t have it any other way.

But at times, it gets overwhelming when you are doing all that for 5 children.  Each child needs love, attention, affection, and all of their needs met, to be able to grow and develop appropriately.

Let’s just say that I needed God more than ever last week.  I went to Bible study with the intention of digging deeper into the Bible and just really appreciate all of what God has given me in my life, but what happened next was truly amazing.

At the end of each lesson, the Pastor and the Minister ask if anyone needs prayer.  Well, I am always hesitant to get up in front of people (I have anxiety about that) but I couldn’t resist the pull that was happening to me, and I knew I had to go up to the front.

I told the Pastor in her ear about what was happening to me in my life, and she leaned me back and said to me “God just told me it already happened,” and I of course broke down in tears, knowing that God did place these kids in my life for a specific reason.

For me to raise them, love on them, nurture them, and watch them grow into such amazing and astounding individuals.  To watch each of the foster children find a special place in our home and in our heart, is so amazing to me and I am so glad that God forgives me for the moments that I do not lead with grace, and pats me on the back when I do.

A huge weight was lifted off my shoulders and I know that this year is going to mean some major things are going to happen with us and that we must depend on our faith to get us through it all.

Thank you so much for the kind comments, prayers, and hope for the Johnson family!!♥♥♥