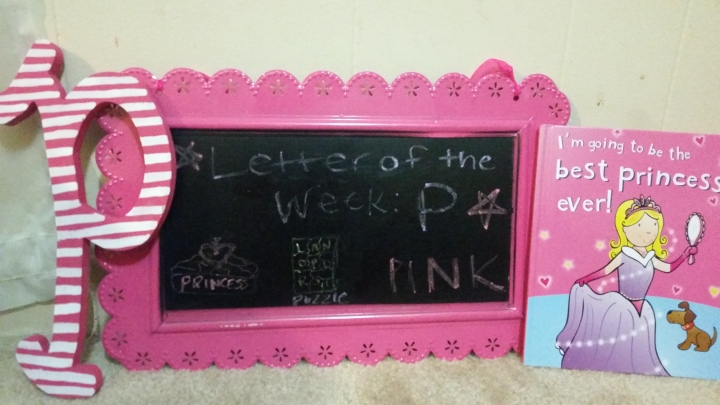 This week was an exciting week for me, because I know Brielle would love learning that so many of her girly things that she loves start with the letter P!

Before hitting the girly stuff, I knew Brielle would pick up easily that P stands for Papa! Brielle calls my step-dad Papa and Shane’s dad PawPaw so it was pretty fun for her to learn that both of her grandparents start with the same letter! 🙂 I knew I had to think of some kind of fun game for her to learn how to spell his name so I said P-A-P-A spells your PAPA and she would laugh and sing it, it was quite cute.

Next learning subject was definitely on the color pink.  I am pretty sure, if anyone has met me after the 7th grade, my favorite color has been pink.  I knew once I had a girl, she would definitely be sporting the color, a lot.  I love that Brielle also loves the color, so every time she would wear it I would ask her “Brielle what color shirt are you wearing?” she would say “pink!” and then I would say, “now what does pink start with?” and she would jump up and say “P!”.  It was fun and a great learning experience practicing both letters and colors.

Princess has also been a thing on the top of her list as of lately, and she LOVED learning that princess started with a P!  She definitely didn’t say no when I pulled out her pink tutu dress made by friend Courtney, and she wanted her nails painted pink just for the special occasion.  It was so precious watching her twirl and hear her say “princess starts with P,” over and over.

Two other main words that start with this letter, are things that we have been working on lately with her, which is poop and potty.  She has gotten the grasp and was doing great, until my work schedule got busier and she kind of slipped back into peeing and pooping in her diaper/pull up again.  So practicing this a lot was fun because she LOVES chocolate candy, and she would get one mini chocolate for every pee, and two for poops, and she did great!

We also practiced tracing the letter (which she really hasn’t fully grasped that yet), picking out the letter on the fridge after I mix them all up, finding the letter in different words and circling them, and pointing to things in the house that she thought started with the letter P! It was a fun week, can’t wait to see what next week brings 🙂